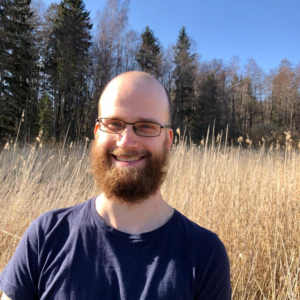 Daniel com­plet­ed a B.Sc. in Bio­med­ical sci­ence at Umeå Uni­ver­si­ty, Swe­den, and a M.Sc. in Cog­ni­tive Neu­ro­science at Rad­boud Uni­ver­si­ty in Nijmegen, the Nether­lands. For the the­sis for his mas­ter’s degree he inves­ti­gat­ed a link between object mem­o­ry and spa­tial mem­o­ry using fMRI and vir­tu­al real­i­ty. After his mas­ter, he worked as a research assis­tant at the Don­ders Insti­tute in Nijmegen where he inves­ti­gat­ed devel­op­men­tal dyslex­ia and abnor­mal­i­ties in neu­ronal migra­tion with struc­tur­al MRI meth­ods. Fol­low­ing that, he worked as a research assis­tant in a project at the Don­ders Insti­tute where he was part of cre­at­ing a pipeline for MRI cross reg­is­tra­tion and hip­pocam­pal seg­men­ta­tion, which could then be able to be used as a pool for pre­dic­tive stud­ies on Alzheimer’s disease.
In 2020 he joined the O’BRAIN lab as a PhD can­di­date in the Helsin­ki part of the group, where he is inves­ti­gat­ing how diet affects the dopamin­er­gic sys­tem and how that in turn affects reward predictions.

This website uses cookies to improve your experience while you navigate through the website. Out of these, the cookies that are categorized as necessary are stored on your browser as they are essential for the working of basic functionalities of the website. We also use third-party cookies that help us analyze and understand how you use this website. These cookies will be stored in your browser only with your consent. You also have the option to opt-out of these cookies. But opting out of some of these cookies may affect your browsing experience.
Necessary Always Enabled

Any cookies that may not be particularly necessary for the website to function and is used specifically to collect user personal data via analytics, ads, other embedded contents are termed as non-necessary cookies. It is mandatory to procure user consent prior to running these cookies on your website.